Air. Funny thing, air.
Once upon a time, during a practice oral examination for a gas turbine test, I asked a young lad what the diameter of a ball of air that weighed 10lb would be—roughly. 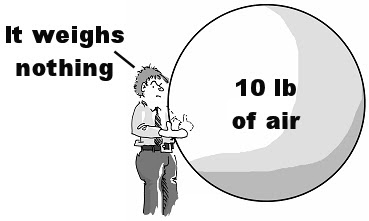 He looked at me like I had just fallen out of a tree and said, “Air doesn’t weigh anything.”
My turn to look askance.
“Suppose,” I asked him, “I drew a square on the sand down at the beach. A square with each side exactly one inch long. What would the air pressure be on that square?”
“15psi,” he said with supreme confidence.
“Correct,” I told him, “So that picture I have drawn is one square inch—what is the weight of air that is sitting on it?”
He was now bemused. He had no idea how to correlate between pressure and weight per area. Pressure is pressure. 15psi--pounds per square inch, at sea level (ISA SL = International Standard Atmosphere at Sea Level) is what you get; there is no way to rationalise between that and weight of air. Weight is a different thing entirely, it seems.

Another thing is humidity.
Humidity is a difficult thing to imagine. People often confuse ‘vapour’ with ‘steam’ but ‘vapour’ is gas whereas ‘steam’ is minute droplets of liquid.
Water vapour is gaseous water that merges with the atmosphere and can make the air ‘wet’. If the air is saturated with water vapour then, when you sweat (or ‘glow’, if you are one of our gentle female colleagues) it just runs off you and will not evaporate into the air around you.
Dry air is more comfortable for humans if you are from a dry part of the World.
To tell if your air is humid, or not, you will need a ‘wet and dry bulb’ thermometer. Then you look up the results on a ‘Relative Humidity Table’ (Appendix ‘C’, page 170, “A Simple Guide To Understanding Jet Engines”). 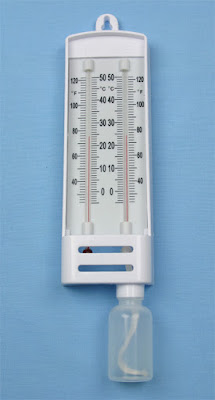 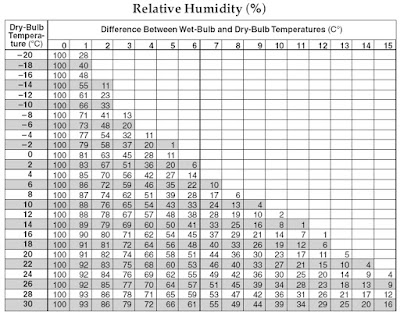 RH (Relative Humidity) Table
Or a cold drink.
If you take a wonderfully cold drink of fresh, pure water that is slightly alkaline and, therefore, very good for you, pop a couple of ice cubes in it and sit the glass on the table. You will notice that there is condensation on the side of the glass. Or not.
In Yemen, where it is very, very humid, you will observe water running off the glass and then off the table rather in the manner that a tap will release water.
In Malaysia where it is less humid you will get a steady drip… drip… of water.
In West Africa where the air coming off the Sahara Desert is extremely dry there will be no condensation because the water is immediately evaporated off into the dry air. It will also be very dry in Antarctica but there the whole drink will turn to ice in a flash so it is hard to tell.
‘Do It Yourself’ humidity kit!

Another little thing is that irritating pressure problem we were talking about at the start.
The higher you go the less the air pressure around you is. Why? Because gravity is pulling the air down towards the surface of the Earth. The higher you go the less air is sitting above you to push down. Less weight above you—less pounds per square inch (in old money and I’m very old!). 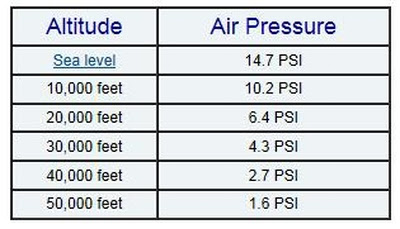 Air Pressure (at International Standard Atmosphere) v. Altitude
Just recently I was flying back from Mauritania in West Africa to my home in Malaysia via Paris. At CDG (Charles de Gaulle) airport there was a change of aeroplane from the Airbus A330 of Air France to an Airbus A380 of SQ (Singapore Airlines).
The A380 cruised, eventually, at 40,000’ above sea level. That is high. Very high.
Just as we approached Singapore I put my plastic bottle of water on the armrest. The bottle was almost empty but I left a little to drink before disembarking.
When the aircraft sank to just below 10,000’ I took a photo of it. 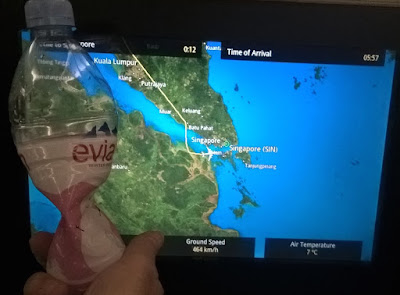 Just goes to show what a difference 31,000’+ makes and remember—the pressure difference outside will be much greater, this is cabin pressure only.

Just a few things to think about when we say, “Just going out for a breath of fresh air…”
Posted by David Leyman at 21:32