The publisher is happy to announce that the problem with the postage rates has been resolved.
Copies of ‘A Simple Guide To Understanding Jet Engines’ are now available from ‘Amazon’ in the United States, the United Kingdom as well as Germany and France.

Thank you for your patience; we hope that this has not resulted in any problems or anguish for those studying for their EASA* or FAA* Pilot’s, Engineer’s or Mechanic’s licenses.

Billions of US Dollars Wasted

For the uninitiated I should like to point out that working on, near or around aeroplanes is dangerous.
As I am fond of telling the participants on my courses the statistics do not support a long and healthy life.

Ground incidents are reported to be costing commercial airlines in the region of USD10 Billion a year.
Ten Billion.
We have no concept of what a ‘Billion’ is. We will, for the moment anyway, stick with the devalued American ‘Billion’ that is One Thousand Million. A British Billion is One Million Million.
It is impossible to imagine one billion. Our brains just will not encompass such a number. We think we know but we do not.
In fact, our brains have problems with any number greater than, say, seven!
When the Americans announced that there was trade deficit of three trillion dollars—yes, dear heart, three trillion dollars, everybody tutted and shook their heads.
If they had said that there was a trade deficit of one hundred and forty five dollars and ninety cents there would have been uproar. Why? Because we can imagine smaller numbers; we know what they will buy; we are accustomed to smaller numbers.
Three Trillion? No chance.
Humour me, do a small exercise. Get your mobile ‘phone or iPad—or what you will, out and tell me what you were doing one billion seconds ago.
Got it?
Surprised?
Now lets go back to the original thought.
Ground incidents are said to be costing Ten Billion US Dollars EVERY YEAR!
The figure rises.
Every single incident is avoidable. Every single incident is the result of someone:
Thinking that they know what they are doing,
Thinking someone else knows what they are doing,
Not thinking!

Everybody has had training. Every single person that goes near an aeroplane has had some instruction about safety.
Everybody.

Statistics may be scoffed at but they do not lie. We know, for example, that people get sucked into jet intakes. They die. Yes, we have all heard the stories—maybe even seen the video where a guy goes down an intake and survives. A rarity.
Every one else dies.
When you go down a jet intake the depression that was there already now gets worse because your body is creating an obstruction to the airflow. The engine is still ‘sucking’ for all it is worth.
Your lungs will empty and then they will try to rip out of your body resulting in your death by drowning—in your own blood. If you are lucky the engine will chop you into tiny pieces 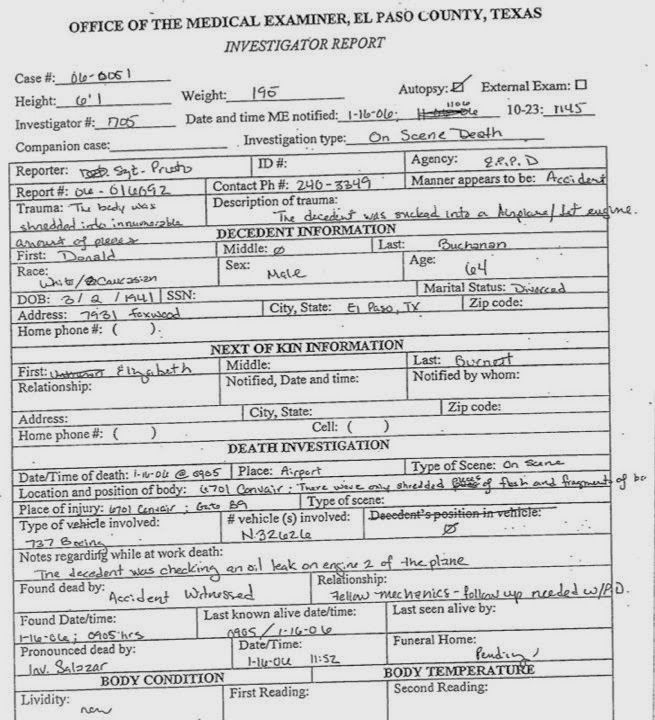 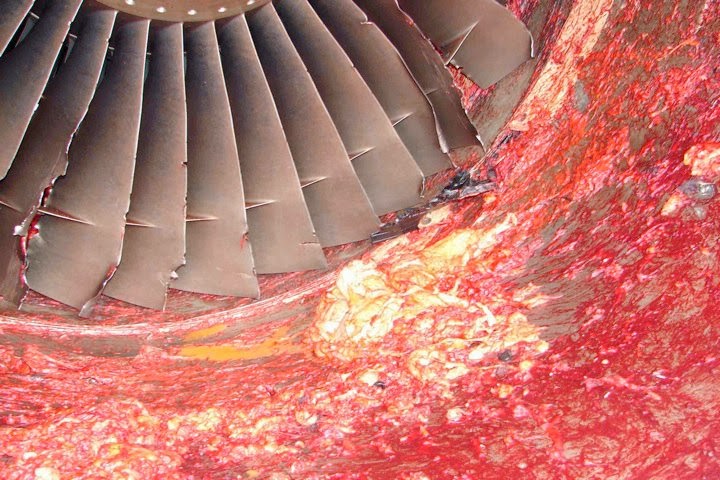 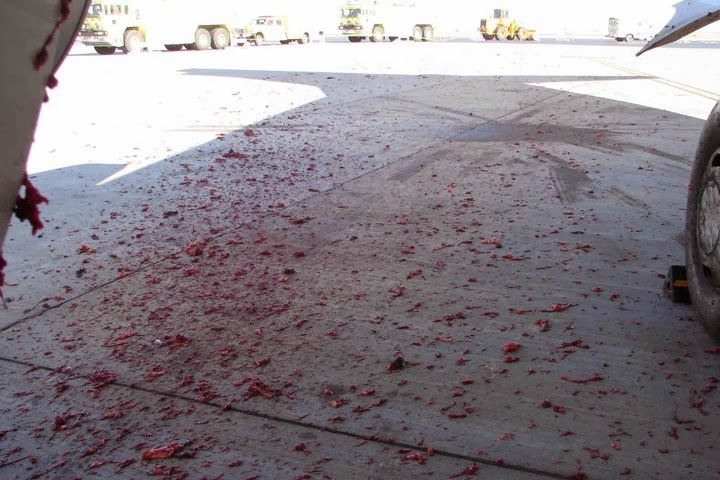 How many people get struck by propellers, tail rotors on helicopters, main rotors, ground support vehicles?
Many.
The cost in human terms is tragic. The friends and family now enter a period of great sadness known as ‘mourning’; Husband, Dad, Friend is gone.

We have said that these are incidents but we know that there is a difference between incidents and accidents.
It is the combination of these that costs so much.

We have rules, regulations, laws, checklists and training for a reason.
The reason is to keep you safe.

Observe that Rule 1 is ALWAYS ‘Look After Yourself’. You are in the best position to do that. Don’t just ‘look’ but ‘see’. Don’t just ‘hear’ but ‘listen’. Don’t assume—THINK.
Rule 2 is not to look after your friends because often you will work with people you don’t like. One guy said to me, “You don’t like me very much, do you?”
I told him that he was wrong. I didn’t like him at all.
But he is still a colleague! One day you may need him to look after you.
Alarmingly, you will work with people who do not like you. No, really. No matter how likeable you think you are, somebody out there dislikes you with a passion.
Rule 3 means that you keep the equipment serviceable and safe. Repairs or replacements are costly and that can mean that there is no pay rise this year—clearly contravening Rule 1!!

Posted by David Leyman at 22:17 No comments:

For the last forty years, almost, I have been primarily involved in training.
Some time ago there was a search to find a book from which to teach jet engines; the search failed emphatically. Every book that we uncovered was too deep. Most of them were to a level that assumed that the reader was intent on designing a new engine as opposed to the Licensed Aircraft Maintenance Engineer (LAME) who just wants to diagnose and repair.
Example: One book that was very large and thick had a page covered in italics; it turned out that this was an equation. After scanning it for a moment or two I realised that the equation could be reasonably simplified into one line, the need for constants and fluid densities did not really apply for practical purposes where only an illustration of the effect was required.
We were not training physicists or design engineers.
Ultimately I was advised that if a simpler book was require then I should write it myself.
This is what then happened.
But.
I insisted that the book would be written in the way that I like to teach and thus it was filled with cartoons.
This has had an upside and a downside.
There were publishers who railed against the use of cartoons; they said that there was no room for humour in a textbook. The other downside was that some people have said that they enjoyed the cartoons but they had no idea what the text was all about because they never read it!
The upside is that many Licensed Engineers, as well as Pilots, Technicians and Mechanics, have thanked me for writing it because they now understood the subject better because it was written in a light-hearted manner and kept the subject down to a simple form in simple English.

Let me explain to you what we are striving for in writing a textbook and carrying out training of any sort. Clearly, it is unlikely that we should be successful in achieving all the requirements listed but we should endeavour, during all training, to be able to cover most of these things:
Under the revised ‘Bloom’s Taxonomy’ we are looking at the following -
The new terms are defined as:
Remembering: Retrieving, recognizing, and recalling relevant knowledge from long-term memory.
Understanding: Constructing meaning from oral, written, and graphic messages through interpreting, exemplifying, classifying, summarizing, inferring, comparing, and explaining.
Applying: Carrying out or using a procedure through executing, or implementing.
Analyzing: Breaking material into constituent parts, determining how the parts relate to one another and to an overall structure or purpose through differentiating, organizing, and attributing.
Evaluating: Making judgments based on criteria and standards through checking and critiquing.
Creating: Putting elements together to form a coherent or functional whole; reorganizing elements into a new pattern or structure through generating, planning, or producing.
(from Anderson & Krathwohl, 2001, pp. 67-68)

Note that I said this was the intention for ‘all training’. So it is.

At the end of the training session the onus is upon the trainee to implement all that they have been taught.
Something that is extremely disappointing is to teach a group of people the correct way to carry out a procedure—perhaps in accordance with the directive from an Aviation Authority or from ‘The Company’, and then see those same people, the very next day, continuing to use the wrong method because that is the Company ‘norm’, it is what they are accustomed to doing even if it is wrong or, even, hazardous.

This is something that occurs Worldwide. Often the trainer is battling against peer pressure, budgetary constraints, personnel deficiencies—in terms of numbers or aptitude, and people with static mindsets in positions that affect the workplace.
Peer pressure: “Don’t bother with that—this is how we always do it here.”
Budgetary constraints: “The Company cannot afford safety equipment—just do what you can with what we have.”
Personnel deficiencies: “We are short handed at the moment, you’ll just have to work an extra shift.”
Inflexible management: “Ignore the trainer—he’s an academic. Besides, he hasn’t been here long so he doesn’t know how we do things here.”

We trainers can only do so much. We can lead the trainee to knowledge but we cannot enforce implementation.

As you see, we trainers can write books that are simplified in order to help, we can put facts before the trainees, we can highlight hazards and give examples of where these things went very wrong for people but, finally, it is up to the trainees to put into practice what we have told them.