Firstly, my apologies for, perhaps, a lengthy ‘Blog’ this time. You will see why.

A question has winged its way over to me that set me back a little bit.
“Have you heard,” they asked, “about aerotoxic syndrome?”
The short answer to that is, “No. I have not.”
Sadly, easy questions tend to have difficult answers and so I need to go into a little detail here to sort this out for you.
The first thought was, ‘Is this another conspiracy theory that has been blown up out of all proportion?’
Some research seems in order here.

Sixteen years ago (1999) a group of chaps filed a report called ‘Aerotoxic Syndrome: Adverse health effects following exposure to jet oil mist during commercial flights’.
As a precursor to this, let us just review how the air gets into the cabin.
Ambient air—the air that surrounds the aeroplane in flight, is pushed into the engines because of forward speed. This is called ‘ram effect’. It is a good thing because the air is pre-pressurised before it gets to the compressor; it also makes the air ‘thicker’ for the fan to grip and push back. 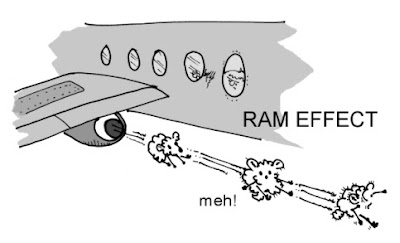 Once the air gets into the compressor the air pressure is raised some more to make it suitable for combustion where we shall add energy to the air by burning fuel in it.
Now back up just a little bit.
When the air is passing through the compressor there are off takes of air called ‘parasitic bleeds’ that are used for several functions on the engine and the flight computer and also a large amount goes off to the air conditioning unit(s) on the aeroplane. 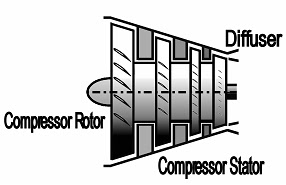 This is the bit the air comes from

The amount of air passing from the air conditioning machine into the cabin is controlled. Too much bleed from the engine and fuel burn increases because we should need more ‘throttle’ to increase the airflow into the engine.
Remember that the primary need for air into the engine is for burning (for thrust) and for cooling the engine. Providing air for the passengers is, in reality, a necessary evil as far as the engines are concerned—remember the term ‘parasitic air bleeds’?
For this reason most of the air in the passenger cabin is re-circulated with only a percentage (about 50%) being replaced on a continuous basis.
How is it replaced? By making sure that the flow into the cabin is greater than the flow being released from the cabin. This will, in turn, raise the pressure of the air in the cabin to an acceptable level for human survival. 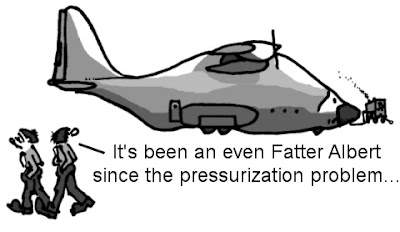 Survival? At 36,000’ there is not really sufficient air for a human being to survive. You would pass out in seconds and die in minutes from lack of air and cold.

So that is how the air gets there.
What about this ‘oil mist’ situation?
The oil that is used in jet engines is not dug out of the ground. It is synthetic. It is born in a factory. This is because mineral oil—oil that is dug out of the ground, is incapable of withstanding the temperature differences and pressures that exist in a turbine (jet) engine.
Note: When you see advertisements for engine oils for your car it will show you how great it is, in a CGI perhaps, at protecting the engine with the pistons going up and down and flames bursting around the cylinder.
Wonderful.
What is really needed is for the oil to protect your engine when it is not running; which is most of the time in your car. If the coating of oil runs off your car engine parts will rust. This is a bad thing.

Synthetic oil is thin to start with. When it gets hot it becomes even less viscous (it gets thinner). Keeping it where it is supposed to be is difficult.
Fortunately, those clever people at Rolls-Royce, for example, are very good at designing seals and sealing systems that will keep the oil where it is supposed to be.
But engines wear. Not much but over a period of time it can become significant.
To have an engine overhauled is expensive. Very expensive. We are talking in terms of millions of US dollars per engine.
Clearly the airlines will want to maximise the use of every engine before it gets sent back to the manufacturers, or an overhaul facility, for maintenance and servicing.

Because the air is tapped off from the compressor, the only sealing part of the engine that we need to worry about for the passengers is the bit at the front. This is called the ‘cold end’ of the engine.
The oil is re-circulated around the engine all the time while it is running. There are places where it gets really hot and the oil will partially break down. This is called a ‘pyrolised’ condition—a chemical alteration in the oil. The toxicity appears to be confined to the additives in the oil and the decomposition of the oil itself.
One of the primary checks the maintenance staff carry out every time the aeroplane is on the ground is to make sure there is no oil leak from the front of the engine—the nose cone and the fan cowl.
If oil is seen here then the engine comes off. No discussion necessary.

What is the likelihood of oil coming from the engine into the cabin? About 1% of the time. The possibility of the oil becoming hazardous is considerably less because stringent checks are carried out between each flight to prevent this from happening.
How do we know if there is a fume hazard in the cabin? Only the crew’s capacity to detect it is available at present. There are no detectors installed that might spot it—or other contaminants in the air.

Perhaps there is another cause for this aerotoxic condition that has not been looked at?
When the aircraft is at 36,000’ the air, in theory, should be relatively clear although certain gases are found at high altitude as a result of pollution. It is likely that these gases are a very small percentage of the total and so it is better to look at the flight envelope through the lower altitudes where industrial pollution is to be much higher.

Climbing out of, or entering, the Beijing area, for example, is likely to introduce toxic chemicals into the cabin because the incidence of industrial pollutants is much higher than in many other places. Beijing is not alone in having a pollutant rich air zone.

What are the symptoms?
Fatigue – feeling exhausted, even after sleep
Blurred or tunnel vision
Shaking and tremors
Loss of balance and vertigo
Seizures
Loss of consciousness
Memory impairment
Headache
Tinnitus
Light-headedness, dizziness
Confusion / cognitive problems
Feeling intoxicated
Nausea
Diarrhoea
Vomiting
Coughs
Breathing difficulties (shortness of breath)
Tightness in chest
Respiratory failure requiring oxygen
Increased heart rate and palpitations
Irritation of eyes, nose and upper airways.
Can we cure it? Given rest and recuperation time your body should recover but repeated flights under these conditions can lead to considerable neurological stress that may become chronic.

Are all aircraft susceptible to engine oil bleeding into the compressor? Early BAe 146’s and Boeing 757’s are poor but the new Boeing 787 is exempt because the cabin air systems do not get their air from the engines. It has a separate electrically driven system for air conditioning and pressurisation.

“Should I worry?” you might ask.
According to the CAA (Civil Aviation Authority) in the UK there are about 30 pilots grounded by the CAA’s Medical Department because of a ‘suggested association between illnesses and the cabin environment’.
But remember that these are people who are sitting in this environment all their professional lives.
Passengers will consume far less time in the air and thus the risk is proportionately smaller.
There is no point in wearing a mask, it will not help. Even the ‘drop-down masks’ on the aeroplane will not help. The only answer is to get off.